Data Scientist – The sexiest job of the 21st century. With the surge in data and its correlated fields, the job of a Data Scientist has become the most sought after job. Many IT professionals and academicians who have worked in quantitative fields want to become data scientists. Do you know scope of data science field over the next few decades? I am sure, you have no answer for this. So, today I came up with the new information for the future of data science. I will give a complete idea for Data Science job trends for the year 2020 with the proper research and facts.

The demand for data scientists is only increasing and will continue to increase in the future. We will take three years in this article, 2020, 2026 and 2029 which is over the next decade. We will see how data science will expand over these date stamps and what the future holds for a data scientist.

According to Glassdoor, Data Scientist is the number one job on its website. This position will remain unchanged in the future. It is also analyzed that the data science openings are open for 45 days. This figure is 5 days more than the ones in a regular job market. For bridging this skill gap, IBM will align educational institutes with industries to create a work-study environment for burgeoning data scientists.

Data Science over the next few Decades

Data Science is predicted to grow over the next decade. It is a staggering fact that over 90% of the data in the world was generated in just 2 years. It is unimaginable to realize the amount of data that will be generated in the next decade. The demand for data scientists will rise by 28% by 2020 alone. More and more industries are becoming data hungry and they need data to hold specialized data scientists who can craft products for the customers. About 11.5 Million jobs will be created by 2026 according to U.S. Bureau of Labor Statistics.

Data Science is rather an unrefined and crude term. It is a general term that has several definitions. However, with the passage of time, the data science roles will become more concretized. There will be a concise definition that will be imparted to data science that will enable the data scientists to handle corresponding operations. Deeper career paths will be developed in data science. Furthermore, a cleaner set of rules and regulations will differentiate pure data scientists from others.

There will also be a diversification of roles in data science over the next decade. Currently data science is an uncharted territory that is often misrepresented by various industries. The job role of a data scientist, therefore, suffers from this lack of representation. This is because currently both SQL operators and Data Scientists come under the same general definition of data science. This problem will fade away as industries will create job roles that are specified only to the specific data roles.

The rise in demand for data scientists will prompt educational institutes to include it in their curriculum. The data literacy will increase in future and a data scientist will have a specialized holding, pretty much like a doctor or a lawyer. That is, he/she will be part of an entirely new discipline in itself. Recently, many universities have released their data science degrees that will bridge the skill-gap in the industries.

Since the field of data science in itself is young, data scientists do not hold years of experience behind them, as compared to other IT related field. In the next decade, data scientists will see a much greater distinction between Senior Data Scientists and other positions. As a result, there will be a much more defined hierarchy of data scientists.

this article has been retrieved from https://data-flair.training/blogs/data-science-job-trends/ 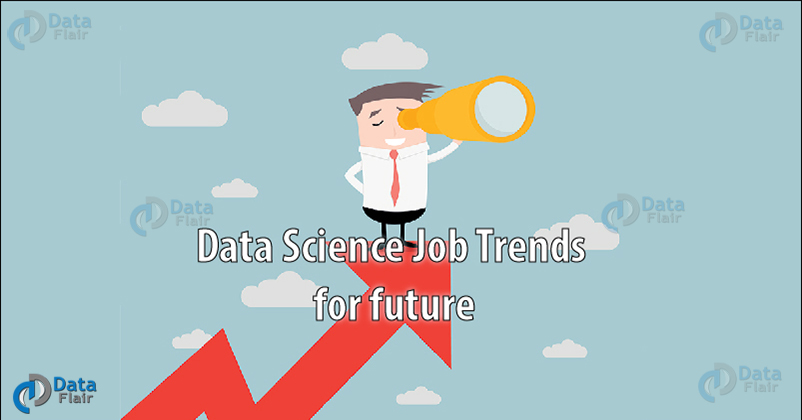